Record players are a fun, novel way to play your favorite music. Music fanatics have said that vinyl records have a much better sound than digital music players, so it’s important to buy a quality record player with high-quality integrated speakers. There are a lot of great options out there, so it can be difficult to find the one that is best for you.

This record player is arguable the best one with integrated speakers out there, and for good reason. Every aspect of it is well made and there are few complaints from customers. It is one of the highest rated record players on Amazon, it has a great sound, it looks vintage and classy, and it is one of the cheaper options! It is almost too good to be true! While we can say a lot about this record player, lets dive deeper into its capabilities and features. 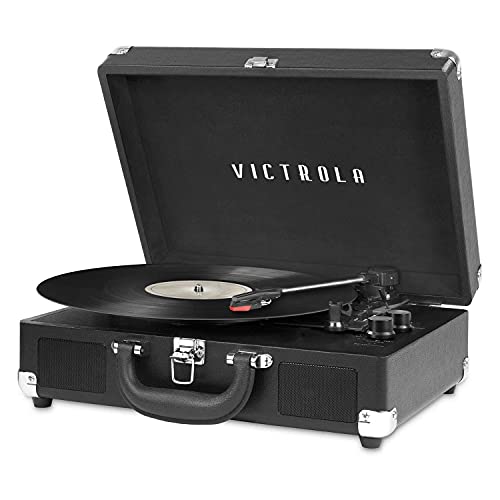 The very first thing you notice when looking at this record player is the beautiful vintage design and how it is made to look like a suitcase! This is a very cool design that looks great open or closed and makes it easy to take on the go. They come in a huge variety of colors and patterns as well. It has vintage detailing that fanatics are raving about, but it is clearly a sleek, classy, and clean record player that will look good anywhere.

The next major detail of this record player is the speakers, which are such an important when it comes to playing music on any device. The speakers have a great “stereo” sound and play the sound clearly and loudly. This record player also features three speed options so you can listen to records that are 33 1/2, 45, and 78 rpm, giving you endless listening options! 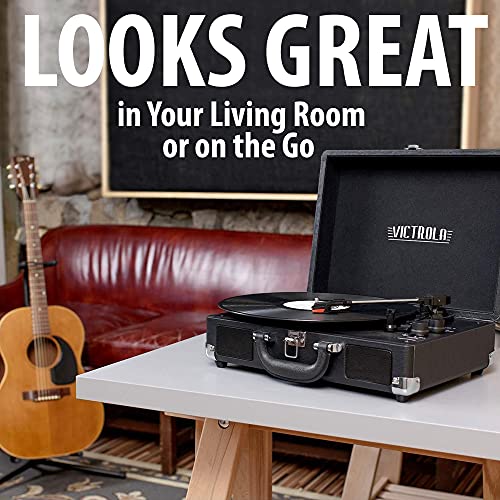 In addition to the sound and technology being modern and high-quality, the Victrola Suitcase Record Player has several connectivity options if you are tired of only playing vinyls that you own. This player features Bluetooth, AUX, RCA, headphone jack, and external speaker connection options. You can connect music from your phone and play it through the high quality speakers on this player, giving you a lot more music to listen to without needing to buy more vinyls!

If you are not a fan of the suitcase look and you want something a bit more classic, the WOCKODER Wireless Record Player Turntable is a great option. It is a standalone turntable that has a more classic look than the Victrola Suitcase Record Player. While it has a more classic look, it does not skip out on the modern benefits of record players nowadays and it features great speakers, several playing speeds, Bluetooth, and more! 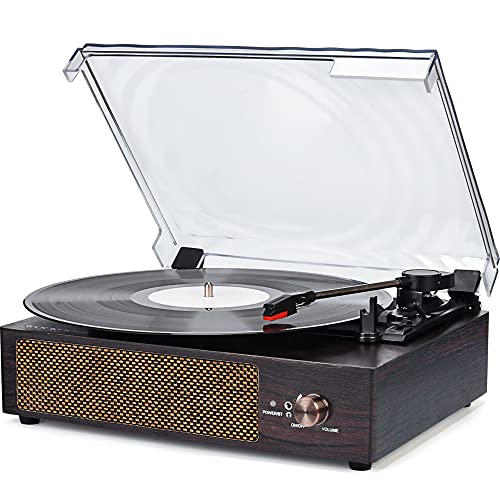 The first thing to cover is the appearance of this record player. It comes in a few wood tones to add to the vintage, classic look and they are all beautiful. This player is a standalone record player, meaning it is mainly meant to be placed somewhere and is not meant for travel. However, that is only the appearance. It is actually a very portable record player and it has a simple, clear, acrylic lid to make traveling with it easier without losing its vintage charm.

The WOCKODER Wireless Record Player has high-quality stereo speakers integrated in it and they sound great. They play any vinyl clearly and loudly so that it fills the room with sound. In addition to the great speakers, this record player also features three speed options so you can play any seven inch, ten inch, and twelve inch vinyls.

Finally, this record player has a lot of connectivity options, making it easy to connect a phone to the speakers, or to connect different speakers to the record player. These options are RCA, AUX, headphone jack, and Bluetooth so no matter what device you need to connect, the player is able to do it. The WOCKODER record player is pretty cheap as well, selling for about $60 on Amazon, and with a four star rating from over 6,000 reviews, it is definitely one to seriously consider. You can check out this record player here.

This record player has quite a different style to it than the other ones, but its unique look is part of what makes it such a cool piece of decor that also serves a purpose. The reason this record player is so unique is because it is designed to look like the radio on the interior of an old Ford Mustang! This record player is definitely different from the rest, but it still captures that vintage look that so many enthusiasts are looking for.

In addition to the appearance of this record player, it has a lot of great features and does not leave out anything important that you might miss otherwise. The sound is great, the connectivity options are all there, and it is enjoyed my most people who have purchased it. 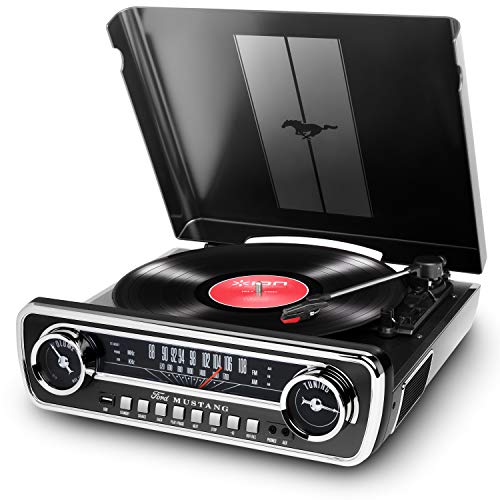 The speakers on this player have a good sound quality and it plays any record clearly and accurately. This player also includes three speed options so you can play any size vinyl, which is essential for a good record player. The connectivity options for this record player are all there so you can connect with RCA, AUX, headphones, USB, and radio. In addition to connecting to a USB, it can also convert a vinyl into digital through a USB.

While this record player is quite the jump in price from the other options we have explored, it is important to include for those that want a more modern looking record player to display. This player is more of a turntable, meaning that it is flat and looks more simplistic. However, this is not to say that it does not come with amazing features, and it can be the perfect look for your new record player. 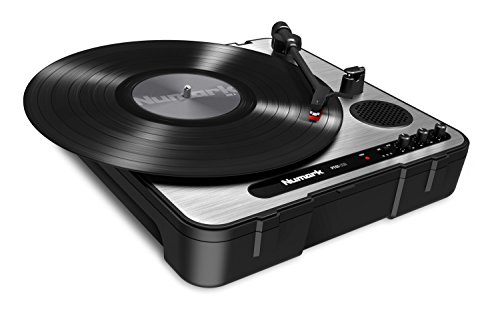 When it comes to function, this record player has it all. It includes a USB connection option in addition to RCA line outputs, headphone outputs, and a stereo input. You can play music to and from this record player in a variety of ways, giving you a lot of listening options. It also includes three speed playing options like many of the other record players do, so you don’t have to worry about not being able to play a smaller or larger record.

There are clearly a lot of great aspects of this record player when it comes to sound, and the speakers are nothing to laugh at either. The build in speaker is great for putting a vinyl on quickly, and they have a great sound to them. Because of all of the inputs, you can connect to any other speaker for an even better sound if you want to.

The Crosley CR8009A-GLC record player is another great option if you love the suitcase look, but want something has a bit softer of an appearance than the Victrola suitcase record player. This record player is a nice, oval shape and it is made with a soft leather material on the outside to really give it that 50’s look. It is a clearly vintage option that is great for any home, whether it is more modern or not.

It is a suitcase record player, so it is easily portable with its lid that closes and latches, and a handle for easy carrying. In addition to its beautiful, vintage appearance, the Crosley CR8009A-GLC has a lot of the necessary features for any high-quality record player. The sound quality and features are up to par with a lot of the other record players we have talked about. 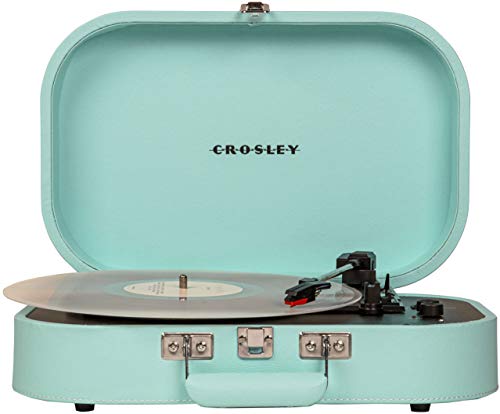 This record player has built in stereo speakers so it is ready to play right out of the box with crisp, clear sound. It also has all of the RCA, AUX, and headphone ports that you need to connect to nearly any device. One of the most beneficial features of this record player is that it has Bluetooth so you can use those stereo speakers to play music from your phone as well, so you’re not limited to just the vinyls that you own.

This record player does not leave you hanging if you have different sizes of vinyls either. Like the rest of the record players we have covered, the Crosley has three speeds that you can play your records on. It allows for all sizes of vinyls to be played, seven inch, ten inch, and twelve inch vinyls alike.

This record player receives great reviews for its soft, vintage appearance and modern technology. It has nearly 600 reviews and they ultimately average out to four and a half stars. This is a great deal for such a high quality record player as well because it is only $60-$70 depending on which color you choose. You can check out this product on Amazon here.

The last record player we will look at is the Victrola 8-in-1 Record Player. This is meant for people who want that very old, vintage look instead of a modernized, vintage look. It is quite large, but contains a lot of great features that many of the other record players do not have. 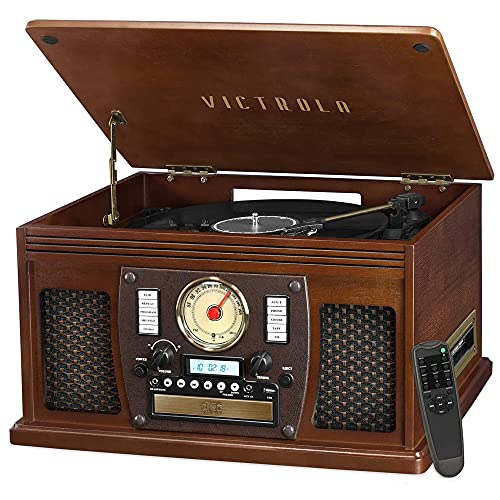 This record player has a three speed turntable, Bluetooth connectivity, FM radio, USB, cassette, CD player, RCA output, and a headphone jack. It is meant to play any music from anywhere. All of these features make this one of the best record players for those that really love that large, vintage look. It even comes with a remote control so you can change settings from a distance.

The speakers on this record player are very clear and very high quality so that anything you play will fill the room with clean sound. It has over 10,000 reviews on Amazon and is another four and a half star record player. It is quite pricey though, at $130 to $150 depending on the color of wood it is made out of. You can look at this record player here!

Vacation Vinyl is a participant in the Amazon Services LLC Associates Program, an affiliate advertising program designed to provide a means for sites to earn advertising fees by advertising and linking to Amazon.com. We also participate in other affiliate programs which compensate us for referring traffic.

link to Record Player History: The Rise And Fall (And Rise) Of Turntables

The record player history is a long topic to tackle. Still, many people are interested in it since it is among the most significant inventions in home entertainment history. That said, how did record...

In a world where everything is digital, vinyl records are considered gold. The funny thing is you won't find them in many homes, except for people who are music enthusiasts. If you have a Vinyl...

Hi, there! Thank you for visiting Vacation Vinyl. My name is Andrew and, this blog is all about Vinyl Records and Turntables. I have been a Vinyl Geek almost my whole life. So over time, I've built up quite some experience, and I would love to share that knowledge with you.

This site is a participant in the Amazon Services LLC Associates Program, an affiliate advertising program designed to provide a means for sites to earn advertising fees by advertising and linking to Amazon.com. We are compensated for referring traffic and business to Amazon and other companies linked to on this site.